Tap Tap Revolution is a rhythm game written in C++ without any special graphics. Instead, it uses the standard C++ console for all graphics purposes.

This was my summative project for the Grade 10 Computer Engineering (TEJ3M) course. Originally, the game was built with a controller with five buttons for input, rather than using a keyboard. The controller also had two seven segment displays, which showed the current score. It was connected to the computer via the now superseded parallel port. The current code is a port of the original game for the parallel port controller.

The game will detect a song if there is a .mp3 file and a .txt file with the same name in the songs directory.

I also had a separate program that would generate a song data file. However, both the executable and the source have since been lost.

I chose to avoid using any external libraries or Windows API for graphics simply convenience (although manipulating the console window was in itself a challenge).

Initially, the entire screen was refreshed when drawing each frame of the game. However, clearing and redrawing caused the window to constantly flicker. I fixed this by only redrawing portions of the screen that needed to be changed, such as moving the notes down or changing the score, and leaving the static portions untouched. This vastly improved the visibility of the game as most of the flickering disappeared. It still slightly suffers from the same problem, most visible on the notes, but is not very disruptive to the gameplay. 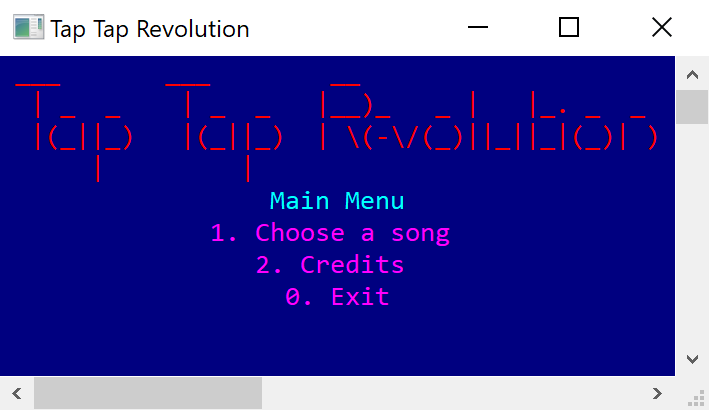